More than 130 local residents attended a presentation held by the George Community Pub team on the afternoon of Saturday 10th February. The purpose of the presentation was to bring everyone up-to-date with the work that had been carried out in determining the future of the George as a community Pub. 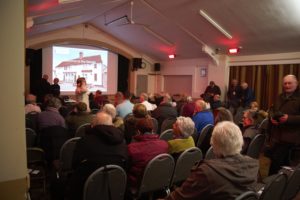 The presentation was given by members of the committee, each an expert in their own field of Finance, Heritage, Business Planning and Project Management. The team presented a summary of the committee’s work which included an agreement with the current owner to purchase the George Pub for a sum of £40,000.

The committee announced that the Community Share issue will be launched on 16th March 2018 and that if anyone would like to receive a paper copy they could request one by emailing shares.wmgeorge@btconnect.com giving a postal address.

The share target would be £300,000 and the remaining £1.3m will be raised through grants from the Heritage Lottery Fund and other grant bodies. The conclusion was very clear that the George could be bought, restored and made into a viable business once again and the whole process will take around 2-3 years before the doors open once again.

Following the presentation Councillor Alexander Nichol was invited to address the audience. He thanked the committee for their hard work in producing such a comprehensive report. He also said that Community Pubs had a special feel and atmosphere and he regularly visited the Sorrel Horse at Shottisham. It was easy for him to recommend Community Pubs and wished The George every success – he would definitely be a future shareholder!

Terry Baxter led the Question and answer session but ultimately he asked a question of the audience. Would they like to see a pub in the village again? Overwhelmingly the answer was yes.

Details from the feasibility study would now be incorporated into a comprehensive Business Plan to be presented alongside the Share Prospectus. Both documents will be made available on our web site in the next few weeks.

An article about the meeting also appeared in the EADT. Click on the link to see the article – EADT Article